Worst Kitty in the House! 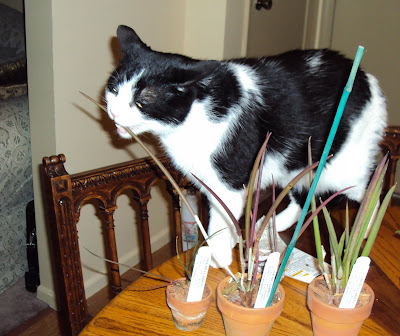 Can you believe this?  Riley instantly became the official worst kitty in the house when he started hassling the brassavolas that arrived from Oak Hills Gardens.  It began first with a little bump and nudge from his cheek.  Then, as I looked away, Riley decided to chow on the David Sander (B. cucullata x Rl. digbyana).  Trixie -- quick with the camera -- caught it on film.
I want to say "Brassavola David Sander" but Sabine, our resident brasssavola expert, says that I should say "Ryncholaelia David Sander" because Brassavola digbyana is now Ryncholaelia digbyana and its hybrids have changed their name, too.
No offense to Bean, but nomenclature is the last thing we need to be worrying about now.  Why is Riley so bad?  Why does he insist on being the worst kitty?  How can he be so cute one moment and a terror the next?  Anyway, I quickly put the orchids in their new home in front of the window.  They're still vulnerable, but I tried to position them away from where the cats can access them.  According to this AOS article on B. cucullata the David Sander hybrid is something to behold: "The frilly lip of both parents combine to make a large exotic flower with grace and beauty."  Unless, of course, your bad cats eat them before they bloom.
I'm surprised Griffin wasn't involved, but maybe that goes without saying.
Posted by CatsandCatts at 8:47 PM