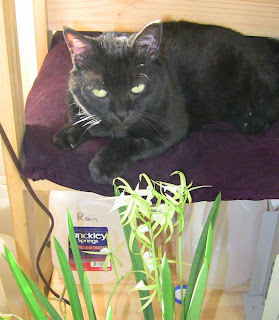 The house faces several serious issues: chronic treat shortages, lack of Vanilla-flavored leftovers, and -- of course -- Riley.  Despite this, I have been asked to prepare a report on the award history of Brassavolas. Frankly, it doesn't seem like the best use of my time. But, because our B. Little Stars is one of my household favorites, I've decided to postpone my nap to work on the report.  Here's what I've come up with:
Brassavola Award History, 1969-2008
by Selena Sabine, February 2010

Brassavolas have won 135 AOS awards from 1969 to 2008.  Of these, 60 (44%) are awards for cultural merit (CCM -- Certificate of Cultural Merit and CCE -- Certificate of Cultural Excellence).  These awards recognize a well-developed plant culture, including the vegetative parts.  Brassavola that won cultural awards had a substantially higher flower count (an average of 219.7 flowers per plant) compared to FCC, AM, and HCC awards (which had an average of 66.8 flowers per plant).  Cultural awards also garnered, on average, more points per award (85.3 for CCM/CCE and 80.5 for FCC/AM/HCC awards.
FCC, AM, and HCC awards center on flower quality.  If racking up multiple FCC awards is your number one orchid priority, Brassavolas will probably offer disappointment.  Only two plants have attained such glory.  In 1973, R.F. Fuchs' B. nodosa 'Susan Fuchs' FCC/AOS was awarded 91 points.  The plant only had four flowers, but they were "exceptionally large," "brilliant," and had "excellent substance."  In 2006, Steve and Rachel Adams of Abingdon Maryland won an FCC award for their B. glauca (FCC/AOS 'Rivers End').
But if you're going to grow award winning Brassavolas, you might consider B. nodosa, especially considering they account for almost 30% of Brassavola species awards.  B. glauca is a distant second (with 20% of all Brassavola species awards).
The big years for Brassavolas include 1989, 1993, and 2006.  In 1989, seven Brassavola species plants were recognized in AOS judging (three of them were B. nodosa).  Eleven AOS awards were granted to Brassavolas in 1993 and 1994.  This slight increase could be due to two award-winning B. tuberculata and cultural awards given to two Aristocrat hybrids.  The biggest Brassavola year was 2006.  B. acaulis were two of the eight B. plants recognized by the AOS that year.
Recently, two complex Brassavola hybrids have caught the attention of judges: Fairy Queen in 2006 and Memoria Coach Blackmore in 2003.
Among the four primary Brassavola hybrids that have won awards, Little Stars and Aristocrat stand out with eight and six AOS prizes respectively.  The late 1970s might have been the era of Jimminey Cricket, but that hybrid (B. digbyana x B. nodosa) hasn't won anything since 1981.  Of the intrageneric Brassavola hybrids, it's really been the Little Stars show since 1995.  The first Little Stars award winner -- B. Little Stars 'Christine Parrish' CCM/AOS (88 points) was submitted by Motes Orchids in Boynton Beach Florida.  It had 474 flowers and 68 buds on 83 spikes.  The flower quality was "average" according to the judges' description, but the plant had "an almost perfect hemisphere of foliage and blooms."
To keep it straight, I've created some helpful tables:
Well, that's my report.  I'm now being peppered with questions like: What kind of heredity influence can we expect from different Brassavola species when we cross them with Cattleyas?  How long have people been growing Brassavola nodosa?  Why does it smell so good?  What are the pollinators of Brassavola?  (I think it's moths . . . mmmm . . . tasty moths . . .).  Who first discovered Brassavola species?  Who is it named after?  How do you grow them?  Can you mount them on bark?

You see where this is going . . . yes, another report.  I need to look for treats.  Maybe vanilla.  Maybe a nap?  Attack Riley?  Rip at the scratching post?
These are all tempting ideas, but first I'm going to say good morning to our Brassavola.  It hasn't won any awards, but it's definitely got our attention.
Posted by CatsandCatts at 6:38 AM