by Selena Sabine
Despite all of the propaganda you read on Cats and Catts, Santa Cat must have thought we were good kitties this year because we found OrchidWiz under the tree!  OrchidWiz is the premier orchid software and it will take my research to the next level. In fact, I wish I had it before commencing the Brachypetalum project.  I would have known, using its Most Awarded function, that Paph. bellatulum was the 32nd most awarded orchid from 2000-2010 (Paph. godefroyae was 43rd, Paph. S. Gatrix was 78th, and Paph. conco-bellatulum was 86th).  Bill Neal’s Gardener’s Latin was also under the tree, and I learned that brachypetalus means “short-petaled.”  Another outstanding gift was Koopowitz’s Tropical Slipper Orchids, which has an entire chapter on the Brachypetalum subgenus (which he refers to as the Brachypetalum Alliance).  It’s given me a lot to work with.
Paph. godefroyae is found in Thailand.  Of the Brachys, it’s closest to Paph. bellatulum in terms of form and color, but Paph. godefroyae tends to have a stronger stem and its markings are more irregular – less dot-like and more stripe or blot-like.  Paph. S. Gatrix (godefroyae x bellatulum) and Paph. Wellesleyanum (godefroyae x concolor) are two immensely important Paph. godefroyae primary hybrids.  For more information and sources for additional reading, Slipperorchids.info offers an excellent overview of this species.
As I mentioned in the first post of this series, taxonomists have treated Paph. leucochilum as a variation of Paph. godeyfroyae at some times and as a separate species at other times, creating confusion about these plants among hobbyists.  So, when looking at the AOS judging data, I made a decision to combine the results for Paph. godefroyae, Paph. leucochilum, and Paph. godefroyae var. leucochilum – and I’m going to refer to them as “Paph. godefroyae” for the sake of simplicity.  I’m only a cat, after all, and Cats and Cats has demanded a lot of my nap time this holiday season.
In terms of AOS awards, Krull-Smith dominates the Paph. godefroyae field.  They earned a vaunted Award of Quality (AQ) in 2007 with a collection of Paph. godefroyae that included Paph. godefroyae ‘Krull’s Perfection FCC/AOS.’  For a mere $75, you can have a taste of 'Krull's Perfection FCC/AOS' at June's Orchid Estate, the exclusive carriers of the Krull-Smith Paphiopedilum collection.  From 1970-2010, Krull-Smith earned three of the top five flower scores for Paph. godefroyae.  Here’s the breakdown:
Paph. godefroyae AOS Flower Awards By Score
Paph. godefroyae AOS Flower Awards By Frequency 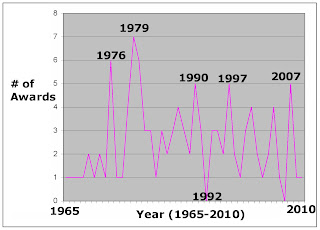 The distribution of these awards over time shows a range of zero to seven awards per year, with notable peaks in 1976, 1979, 1990, 1997, and 2007.  I don’t care to speculate on the causes of these upticks.  The pattern of the award history of Paph. godefroyae doesn’t seem obvious and it’s above my pay grade to further delve into it at this point in time.  Instead, I intend to take a nap, but I hear Griffin begging for treats in the kitchen, so I might want to get in on that action before doing anything else.
Posted by CatsandCatts at 2:20 PM