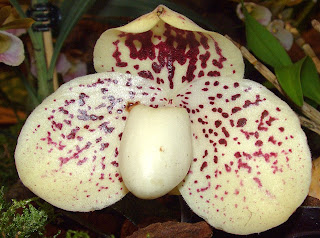 Paph. bellatulum was first described by Reichenbach in 1888 and it remains the best known and most awarded Brachypetalum species.  Its name comes from bellus, which means “beautiful” in Latin.  Hybridizers have made extensive use of Paph. bellatulum for its round flower, and it’s in important primary hybrids like Conco-bellatulum, S. Gatrix, Vanda M. Pearman, and Psyche.  The problem with bellatulum is its weak and short stem, which is often targeted in breeding programs by crossing bellatulum with Paph. niveum or Paph. godefroyae. (For more information, see this thread on SlipperTalk.com, this info sheet on Slipperorchids.info, Rebecca Northern, 1980, Miniature Orchids, pg. 133, and Steve Frowine, 2007, Miniature Orchids, pg. 157.).
The best bellatulum in AOS judging history is Paph. bellatulum ‘Rainforest’ FCC/AOS (90 points) exhibited by Rainforest Orchids in June 1987.  The judges praised “a significant size increase over [the] previous AM,” which produced “nearly perfectly symmetrical conformation of parts, and consequent delightful harmony of shape and color.”  This FCC is quite an achievement given large number of bellatulum flower awards from the 1960s to present (148) and the fierce competition from the Wellensteins (10 bellatulum flower awards), Marriott Orchids (6 awards), South River Orchids (6 awards), and Nick Tannaci (5 awards).  Examining the award data over time, 1981 and 1997 emerge as the years with the highest number of AOS awards (13 and 15, respectively).  This variation can be explained by the successful efforts of Bob and Lynn Wellenstein, who earned eight of their eleven bellatulum AOS awards in 1997, and South River Orchids, who earned four of their six bellatulum AOS awards in 1981. 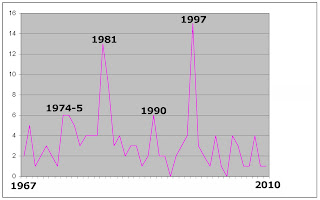 What did judges praise and criticize in their evaluations of Paph. bellatulum flowers?  Reading judging descriptions are one way to understand the criteria by which AOS judges award Paph. bellatulum flowers.  A single description isn’t very descriptive.  Sometimes, however, the judge’s description will make an explicit comment about why the flower gained or lost points.  Collected together, these comments emphasize a round and proportional flower with little or no cupping, with symmetrical dotting.  I’ve listed the raw data below.
Now, where’s my treats?
Posted by CatsandCatts at 9:32 PM

I grow many brachys and enjoy your postings in your blog on them.
I would like inform you that the photo that you put up for bellatulum is godefroyae.
I have a blog which I update monthly on my plants. You can check it out at:
http://paphyeo.blogspot.com/