Brachypetalum -- Church of the Subgenus 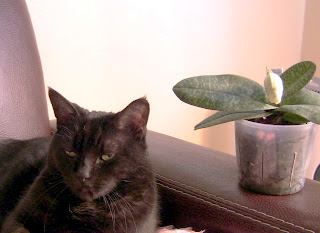 
We’re going to close out 2010 with an in-depth look at Paphiopedilum Brachypetalum (also known as “Brachies” or "Brachys").  What’s so great about Brachies?  How do you grow them?  What exhibitors have won the most AOS awards for their Paphiopedilum Brachypetalum? Who are the up-and-coming Brachy growers?  How has the frequency of Brachy awards changed over time?  Which Judging Centers have seen the best Brachies?  What Brachypetalum species have garnered the most awards?  How do the Brachypetalum species compare against one another?  What are the qualities in Brachypetalum flowers that judges considered praiseworthy or problematic?
Will this report get me more treats?  Maybe not, but Brachies comprise an ever-growing segment of the Cats and Catts orchid collection and it’s about time we learn about them.  During the final week of 2010, I’ll explore the award histories of Brachypetalum species and select primary and complex hybrids.  Here’s the plan:
Part 1: Paph. Brachypetalum, an overview
Part 2: Paph. bellatulum
Part 3: Paph. concolor
Part 4: Paph. godefroyae
Part 5: Paph. niveum
Part 6: Brachypetalum primary hybrids
Part 7: Brachypetalum key complex hybrids
Why Brachies?
Brachypetalums host a dynamite flower on a compact plant.  The flowers remind me of snow globes, kaleidoscopes, blood splatters, Pollock forgeries, Rorschach tests, space aliens, and other ventures into the weird and disturbing.  They’re terribly cute in flower, but they look good all year.  Brachies, like other Paphs, have gorgeous foliage.  The neon leaf marking is almost like a jewel orchid, and the succulent quality of the leaves makes them glorious, even in the off season.  You can comfortably grow a baker’s dozen with one or two square feet and a couple of compact florescent bulbs.  These are not easy plants to bloom or keep alive, so you can indulge in Brachypetalum pride when you grow them. 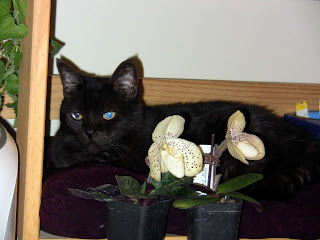 What are Brachies?
These species are found in Burma, Cambodia, Laos, Malaysia, Thailand,and Vietnam.  Taxonomists describe Brachypetalum as subgenus of Paphiopedilum that includes species Paph. bellatulum, Paph. concolor, Paph. niveum, Paph. godefroyae (syn./var. Paph. leucochilum), and Paph. thaianum.  If you remember your high school biology class, you might recall that “Subgenus” is a taxonomical category narrower than “Genus” and broader than “Species.”  Divisions among subgenera help make sense of an otherwise bewildering array of species.
The five Brachy species include bellatulum, concolor, niveum, godefroyae, and thaianum.  AOS judging descriptions list Paph. leucochilum as either a variation of Paph. godefroyae or, more recently, as a synonym.  SliperOrchids.info notes the “great debate among taxonomists over the relationship between Paph. godefroyae, Paph. leucochilum, and Paph. x ang-thong,” but I’m going to refer to them universally as godefroyae for the sake of consistency.  Paph. thaianum, the newest kid on the Brachy block, was first described in 2006 in Orchid Digest and has no judging history as of 2010.
Brachypetalum Culture
I'll keep this section brief and refer you to the two essential readings on Brachy culture: this essay by Lynn and Bob Wellenstein and this essay by Dr. Tanaka.  The Wellensteins observe that the fat roots and succulent leaves of Brachypetalum suggest, “They are not naturally inclined to grow well in continually wet conditions.”  In my experience, they need more water than Cattleyas and less water than other Paphiopedilums.  The best growers use high-quality water, water with few dissolved solids (i.e. reverse-osmosis water).  I’ve been using a mix of RO water and tap water with few problems.  Water is easily trapped in the nodes of the leaves, so high air circulation is essential.  I keep a fan running nearby twenty-four hours a day.  My anecdotal evidence leads me to believe that lack of air circulation and overwatering are the biggest Brachy problems for the home hobbyist, but I’ve also killed one or two from underwatering.  They're a little bit fussy and you have to watch them carefully -- daily -- because they're usually far into the danger zone by the time their leaves show signs of distress (look for a loss of shine or sheen on the leaves, tiny pock marks, dry edges, or rust).
Judging Brachypetalums
I’ll discuss specific judging comments when I cover the different species, but definite themes emerge.  The judging descriptions of Brachy species favor round, well-proportioned, and flat flowers.  Cupped and reflexed flowers tended to lose points, but some awards went to flowers with “slight cupping.”
The vast majority of AOS awards for Brachypetalum were given at AOS Judging Centers (JCs).  Out of 338 Brachypetalum AOS flower awards (excluding Judges’ Commendations and cultural awards) only 51 awards were given at orchid shows.  Three JCs (Mid Atlantic, Pacific Central, and the Pacific South) saw the best Brachies.  I’ve listed the full results below with the number of awards in parentheses.  It’s difficult to draw conclusions from these data because the individual exhibitors largely drive the results.  It’s not like the Mid Atlantic region is the best place to grow Brachies, or that the Mid Atlantic JC is Brachy-biased.  More accurately, the Wellensteins showed their plants at that particular JC, and the numbers reflect that fact.
1. Mid Atlantic (48)
2. Pacific Central (38)
3. Pacific South (34)
4. National Capital (14)
5. Florida North Central (10)
Honorable Meows: Northeast Judging Center (8) and Mid-America (8)
With 28 AOS flower awards for Brachy species, the Wellensteins are, by far, the best Brachy breeders of all time.  Nick Tannaci, South River Orchids, and Krull-Smith have also produced a notable number of award winners.  In recent years, The Orchid Inn is capturing an increasing number of awards.
I broke the data into separate decades, which produced some interesting results.  In the 1970s, Nick Tannaci was leading the forefront of Brachy breeding.  In the 1980s, three companies, including Paphantics, River Valley, and Rainforest Orchids, created the top shelf of awardable Brachy species.  The 1990s were dominated Bob and Lynn Wellenstein.  No one came close.  During the 2000s, however, Krull-Smith surged ahead with 10 awards.  The full results are below.
Top Ten All Time Best Brachy Exhibitors
1. Bob & Lynn Wellenstein (28)
2. Nick Tannaci (12)
3. South River Orchids (9)
4. Krull-Smith (7)
5. Rainforest Orchids (6)
6. Marriott Orchids (5)
7. Orchid Thoroughbreds
8. W.W. Wilson
9. William H. Starke and Son
10. G.A. Wright
Honorable Meows: Albert A. Alberts, A&P Orchids, Fort Caroline Orchids, Orchid Inn, Edwin & Donna Wise, Harold E. Walker, The Beall Orchid Company
Brachypetalum Species AOS Awards by Exhibitor Over Time
Nick’s World (1969-1979)
1. Nick Tannaci (7)
2. W. W. Wilson (4)
3. Harold E. Walker (4)
4. The Beall Orchid Company (4)
5. Albert A. Alberts (4)
Honorable Meows: Carl and Imogene Keyes (3) and Fort Caroline Orchids (3)
Age of the Paphanatic South River Rainforest (1980-1989)
1. Paphanatics (8)
2. South River Orchids (7)
3. Rainforest Orchids (5)
4. Bob & Lynn Wellenstein (4)
5. Nick Tannaci (4)
Honorable Meows: Krull-Smith Orchids (3), Limrick Inc. (3), and Marriott Orchids (2)
The Wellenstein Era (1990-1999)
1. Bob and Lynn Wellenstein (16)
2. Paphanatics Orchids (4)
3. Breckenridge Orchids (3)
4. Krull-Smith Orchids (3)
5. Marriott Orchids (2)
Honorable Meows: Orchid Inn (2), Woodstream Orchids (2), and Hanajima’s Orchid Co. (2)
The Krull-Smith Era (2000-2010)
1. Krull-Smith Orchids (10)
2. A&P Orchids (3)
3. Jim and Emily Clarkson (3)
4. Orchid Inn (3)
5. Marriott Orchids (3)
Honorable Meows: Stephen and Geraldine Male (2) 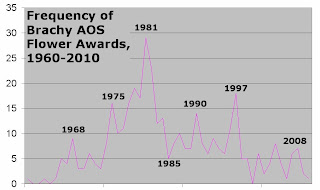 Disclaimers: I'm a beleaguered cat in a crazy house full of freaks and frogs.  I aimed for accuracy, but I'm sure I made errors.  I invite others to double check my work and correct me when I've written something incorrect.  Also, my report uses AOS award information to shed light on these amazing plants, but I’m not an orchid judge.  I’m only a cat, so there’s only so much I could do between naps.  For instance, my reports refrained from computing flower count and flower size.  The former seemed unimportant and the latter required too much math.  Most AOS awards were given to plants with one or two flowers, so I surmised that a Brachy's flower count is not really a big deal (AOS cultural awards are a totally different story).  The AOS records flower size along multiple dimensions, inviting complex mathematical modeling.  Should I index flower size by the height of the flower’s dorsal sepal?  Should I add the size values together to create a composite score?  It gets thorny.  Parsing the relationship between flower size and AOS scores could prove to be important, but it’s an undertaking for another time or for another cat.

Posted by CatsandCatts at 10:00 PM

LOOKING FOR KITTENS FOR SALE?

Cats and kittens are the most popular house pet on the planet. Anybody who loves cats has probably been fascinated by these independent, mischievous, charming, and mysterious pets. If you are looking for a high-quality Cats & Kittens For Sale that really stands out, Downtown Kittens Breeder Cattery is definitely the right choice for you.

Downtown Kittens Breeder” is a family business that specializes in luxury, purebred cats, and kittens for sale. We have proudly provided U.S homes with furry bundles of love since June 2010. As you browse through our website, you will be able to find and even reserve purebreds such as Sphynx Cat Breed,Munchkin Cat Breed,Bengal Cat Breed.