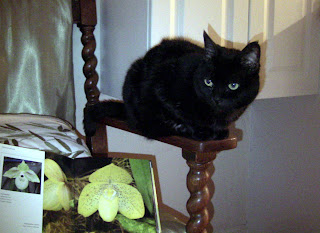 I’ll discuss Paph. concolor in just a moment, but I first need to tell you about the complaint I intend to file with the ASPCA.  Kitty labor standards have been severely breached with the Brachypetalum: Church of the Subgenus project.  All of this work on a holiday?  Can a kitty get a little help?  Riley has been exceedingly lazy, lounging in his cat bed all day.  Griffin has commandeered and camouflaged herself in a special new kitty blanket from L Spice.  Lan Lan has frittered away her time playing with the Cosmic Catnip Banana.  So, I’m researching these plants and compiling data while my siblings are sleeping, begging for treats, and chasing imaginary bugs.  I’m going to notify the proper officials. 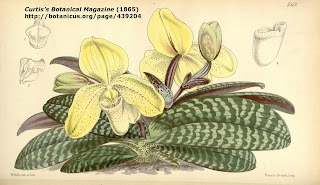 Paphiopedilum concolor is the yellow Brachy species.  Judges’ common color descriptors include variations of yellow (e.g. “light butter yellow” and “creamy yellow”).  My orchid books suggest that it’s the easiest Brachy species to grow and, perhaps not coincidentally, it’s found in a wider geographical range compared to other Brachies (it's found throughout Thailand, Cambodia, Lao, and Vietnam, as well as parts of China and Burma).  Frowine describes it as “commonly offered and easy to grow.”  You can purchase a Paph. concolor of your very own at Sam Tsui’s Orchid Inn or EnLightened Orchids.  For the hardcore, Paphanatics offers them by the flask.
Paph. concolor is a parent to over fifty primary hybrids, including two that are enormously important for complex Brachy breeding: Paph. Wellesleyanum (Paph. concolor x Paph. godefroyae) and Paph. Conco-bellatulum.
Paph. concolor tends to have smaller flowers than its sister Brachies, and that’s reflected in its judging record.  There are almost as many Paph. Conco-bellatulum awards as there are Paph. concolor awards.  From the 1966 to 2010, AOS judges awarded only 54 Paph. concolor flowers HCC, AM, or FCC awards (compared to Paph. bellatulum's 148 awards).  The best of the bunch was Robert W. Koffler’s “BK’s Gem” FCC/AOS awarded in 1992 (91 points).  It’s quite an accomplishment – the only FCC awarded to this species.  The judges said that the “nearly flat” flower had a “striking combination of large size, dark color, and superior balance of floral parts [that] led to an immediate consideration for an FCC.”  More recently, Marriott Orchids earned an AM (84 points) in 2000 with Paph. concolor ‘Massive’ AM/AOS, which is in the upper ten percentile of all concolor flower awards.  The most successful exhibitors were (you guessed it) Lynn and Bob Wellenstein with four awards.  Marriott Orchids and Limrick Inc. each claim three AOS awards for Paph. concolor.  Orchid Thoroughbreds and Rod McLellen won two AOS awards for their concolor flowers. 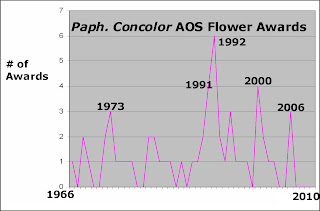 You can see from the graph that 1991 and 1992 witnessed a surge in Paph. concolor awards.  Limrick and the Wellensteins earned a total of five awards during those years, but whether their successes account for the statistically significant upsurge was more than I wanted to think about this Christmas Eve.  There are rumors of summer sausage treats, I need to study that Koopowitz book, I’m missing my nap, Riley is acting like a complete weirdo, and then there’s that ASPCA thing.
Posted by CatsandCatts at 7:58 PM