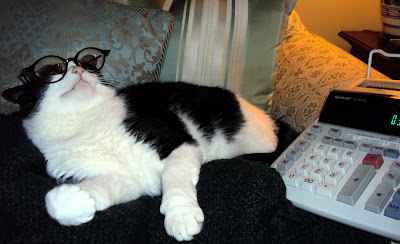 Riley frequently exhibits bad behavior, but he eventually found his place in Cats and Catts orchid house.  While he can't be trusted to watch over the orchids, and his research skills aren't as sharp as Sabine's, Riley's good with math and science.  So, we've put him in charge of monitoring our orchid growing culture.  He collected 58 days of data from December 21 to March 19 and has returned with the Winter Report.
Winter 2010 Orchid Culture Report
By Riley Donovan

Our humidity is fine. Kansas experienced an especially cold winter, so we thought that anything above 50% relative humidity was doing okay. But Riley points to the daytime/nighttime temperature difference as a potential problem.  The 12 degree temperature swing is less than ideal.  As Riley explained, many orchids need a diurnal temperature variation of about 15 degrees to induce blooming.  Ned Nash writes that "a 15-20 degree difference between day and night is best" for growing cattleyas, especially mature plants (Brooklyn Botanic Garden Guide, pg. 46).  Riley suspects that the true temperature variation in the orchid space might be less than 12 degrees because the fancy thermometer might be logging nighttime lows and daytime highs that are reached only for brief moments.  The relatively small temperature swing is something we need to address.

Analysis of temperature variation might not be exciting, but it's important and Riley looks cute in glasses.

Posted by CatsandCatts at 7:18 AM

Diurnal variation was my biggest concern when I first got into orchids (and gardenias, for that matter). But honestly, living in old, crappy, drafty apartments for years had the benefit of giving way better temperature differences than nice new homes. :)