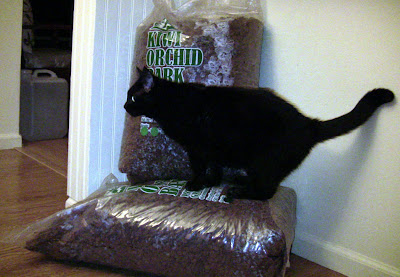 Word of a hot new bark hit the street like a scrap of salmon falling off a dinner plate.  “Kiwi bark,” they called it.  High quality stuff. You only need to repot every four or five years with it.  Old timers said that they haven’t seen bark like this since the 1980s.  I knew I had to get me some bags, so I hatched a deal.
It was a sun kissed September afternoon as I rolled up on the house, Toonces-style.  Stopped in front of the open garage, the smell of pine hit me like a water gun spray.  Trays of orchids everywhere.  Multiple genera.  True madness.  It looked like a severe case of orchid addiction and I had a feeling he was an accredited AOS judge.  I was in the right spot.  I put a roll of Andrew Jacksons in my fur coat and cautiously exited the car.
The man eyed me nervously through his spectacles.
“I hear you have some bark,” I said.
He nodded and pointed to an opened bag of dark brown wood chips.  I slowly reached my paw in the bag.  Careful.  Like I’m stealing a piece of chicken off the kitchen counter.  The situation was already high-wire – I didn’t need to make it more jumpy.  I brought the brown wood chip to my nose.  The way my whiskers bounced off its surface.  That forest aroma.  My tail flicked hopefully against the Fall air. I knew this was superior bark.
“Two bags.  Medium grade.”
After loading two bags in the trunk, he reached down for a third.
“Since you’re headed out West, I wonder if you wouldn’t mind holding a few for my associates.”
This is always how it starts.  You think you’re making a square cash-for-bark transaction, but there’s always a catch.  Then, before you know it, you’re trading in perlite.  You’re brokering charcoal deals.  You're the middle-man for reverse-osmosis equipment.  Then you find yourself caught in a web of secrets, extortion, bribery, blackmail, assassins, and the whole rotten root system of the underground potting materials trade.
“That wasn’t what I had in mind.”
“I thought you might say that.”
He reached behind his back and produced a bag with a green leaf.  The pseudobulb showed viable roots.
“Dendrobium Lindleyi ‘Joy.’  For your troubles.”
Wasn’t this cutting from that gorgeous and floriferous award winner in the February show?
Well played.  He was good.  I started purring in spite of myself.
***
The back wheels sagged under the weight of pine.  The Dendrobium stared at me from the passenger seat.  The purring had long ago changed over to vet-visit-like stillness.  I kept my yellow eyes forward, tried to focus on the endless expanse of freeway, but I couldn’t shake my doubts.
“You’ve done it again, Bean.  In over your head.  Just like the giant feather-toy debacle.”
It was nightfall as I approached the driveway.  It was my own home, but something seemed fishy, and not Friskies Seafood Medley fishy.
***
I swung open the front door to find two intruders.  Claws out, I pounced on the couch with a hiss.  On my right flank, a man with a handlebar mustache lurched backwards.  I drew on all of my prior training with a laser pointer, but the consequences were much more dire than being unable to catch a shiny red dot.  Seeing my nine lives flash before me, I quickly pivoted and caught him with my back claws.
“Oh my,” he exclaimed with a disarming folksiness.

I retracted my claws and propelled forward toward the second intruder, the woman with the long hair. I spotted my landing on her left shoulder, but she ducked.  I landed with an embarrassing thud and quickly tried to pretend that I intended to land on the floor all along.  I glanced up to see the two of them smiling down at me.
“Your sister Lan Lan let us in.  We called ahead and Riley agreed to load the bark from your car to each of ours.  I think he’s probably doing that right now.”
“What do you want from me!?  Is this a set up!?”
I realized how paranoid I sounded only after the words escaped my mouth.  But why shouldn’t I be paranoid?  They seem perfectly nice, but this bark business is a rough trade.  I was getting in too deep. How can I claw out? 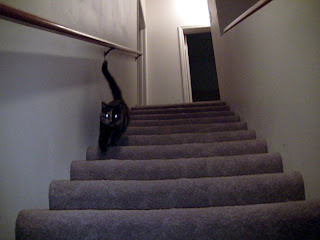 Griffin ambled down the stairs.
“Hey guys!  Do you have any treats?”
Griffin!  Where did she come from?
“Pet me!” she said to the strange woman. “And, do you have any treats?”
“You’ll have to excuse Griffin.” I said.  “She’s very…”
Griffin let out a loud cry before I could finish the sentence.
“Do you have any treats?  Will you pet me?”
Griffin seemed unfazed by their puzzled looks and lack of treats.  I looked at both of them and yawned.
Griffin begging for treats.  No surprises here.
“Treats?  Please?  I haven’t had treats in months,” she pleaded.
I was about to correct Griffin and mention that she had several treats yesterday, and that our guests already said that they didn’t have treats.  But I let it go.
“I need more pets,” she said, angling her back into the guest's shin. “And do you have any treats?”
“We better get going,” the mustache man said. The lady with the long hair nodded and quickly packed her things.
We narrowly avoided a dicey situation, but it was just another day of living dangerously in the Cats and Catts house.

Posted by CatsandCatts at 8:59 PM

Did you just reference "Toonces?" I'm both amused, and feeling old. :)