Dancing to the Drumbeat 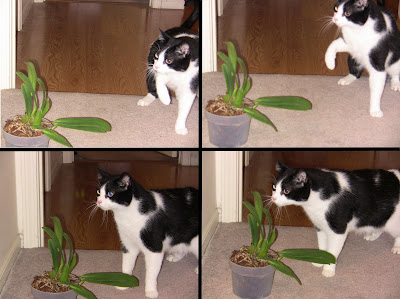 Riley was acting like an especially freaky freak, so Trixie took a few photos of him moving around the Lc. Drumbeat 'Heritage' I purchased from Oak Hills Gardens.  Trixie took this photo only a few days after I repotted the plant in a 6" clear pot.  The medium in its prior pot had broken down and started to resemble mush.  It loves the new arrangement and has thrown down dozens of new roots in its new container.  Maybe Riley anticipated the plant's excitement?

Or maybe Riley was celebrating its lustrous pedigree?  Lc. Drumbeat was officially registered in 1969, and Fred Stewart's 'Drumbeat' received HCC recognition (77 points) at the Mid-America Regional Judging in St. Louis in 1970.  Stewart's lesser-known Lc. Drumbeat 'Triumph' also received HCC status with 75 points the same year.  I don't know much about Fred Stewart except that a 1966 (Apr. 17) Los Angeles Times article noted that he was one of the leaders in creating miniature cybidiums.  Most recently, a 'Heritage' plant owned by Eden Hill Greenhouses and Timothy M. Volas received 90 points and a Certificate of Cultural Excellence (CCE) award from the AOS at the 2004 Greater Lansing Orchid Society Show.  It's worth owning AQ+ simply so you can see a picture of this beauty -- thirty-four flowers, 27 buds, and you can almost smell the perfume from the computer screen.

Lc. Drumbeat is bred from no fewer than nine Cattleya species (C. dowiana, C. mossiae, C. warscewiczii, C. trianaei, C. gaskelliana, C. luddemanniana, C. labiata, C. mendelii, C. warneri) over a period of six breeding generations.  Of these species, C. dowiana stands out as perhaps the most important, giving yellow and red veining to the lip.  The yellow petals and sepals of dowiana are extremely recessive, so the lavender in Drumbeat is amply covered by L. purpurata (its sole Laelia influence), C. trianaei, and C. labiata.

Riley made a handy chart so you can keep it all straight:

Posted by CatsandCatts at 6:01 AM