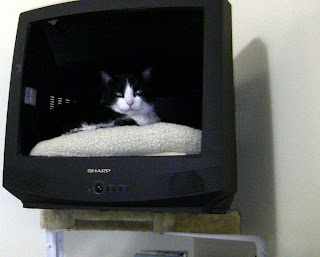 by Trixie
When it comes to kitty comfort in Cats & Catts house, we go above and beyond. Always looking for places that allow them to be adorable in new and precious ways, we decided to build a Kitty TV for our cats to lounge in.
The plan was originally posted on facebook. It seemed easy enough: find an old TV or computer monitor, gut it, and hang it on the wall….Viola! Instant Kitty TV house!
Brian found the TV on the side of the road, and brought it home, full of enthusiasm for the project! He thought that smashing the glass screen with his sledgehammer was the best plan (to quote him, “When you have a sledgehammer, everything looks like it needs to be hammered!”) He taped up the front so when the glass shattered, it would not rain all over the living room.
Intervening after the first sledgehammer hit barely glanced off the screen, I suggested we unscrew the back of the TV, and remove the guts, including the glass, without resorting to violence.  Pulling out my screwdriver, I removed the screws and the innards.
Once the insides were removed, it was simply a matter of mounting the TV on the wall.  There are typically two cats on Brian's desk at any given time and that does not leave a lot of work room. I decided the best placement of the TV would be a place that we could watch and enjoy.
So, I mounted the TV in the corner of our shared office. I screwed through the plastic on the bottom of the set into some L-bars I had on hand. Then, I added a piece of thick foam in the bottom, added a kitty bed, and waited for the kitties to wake up and start jumping in.
It only took about an hour for the first visitor to be scheduled on Kitty TV! Riley was the first program, and he has become a daily Must See TV! Three of four Cats & Catts kitties enjoy the kitty TV (as evidenced by these photos) Bean pays for the cost of Kitty Cable by letting her paws dangle out of the set. 3-D glasses, Not Required!
Enjoy!
Posted by CatsandCatts at 8:48 PM

So cute! What a great way to recycle a television or computer monitor! And the fact that the kitty loves it is a testament to its coziness.