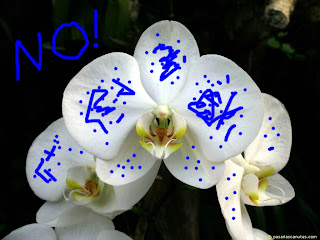 I returned Sunday from Memphis Orchid Show and MidAmerica Orchid Congress Spring meeting. The show was fantastic and I hope to have photos and reports about it later in the week. The weather was horrendous on the drive through Missouri. I drove through two tornado warnings along my route on I55 and I70 but I had no idea how bad things were in Joplin. According to Facebook updates, the relief effort is inundated with bottled water and clothes, but they need money. The Heart of Missouri United Way seems to be one of the most direct ways to help.
Thinking about the tragedy in Joplin prompted me to think about other awful things going on in the world. I started thinking about those fake-looking blue orchids. One of the Holy Grails of orchid hybridizing has been to breed or find a blue orchid. Some orchid flowers have hues of violet that appear blue, but true blue is still a dream. And maybe it should stay that way. I've noted a proliferation of "blue" orchids in my town and it's led me to rethink the need to breed blue.
Let's be clear: these "blue" orchids are an abomination unto all that is good and true. They're a pox on the plant world. Horticultural hell beasts. Atrocities, all. It hurts to look at them and I find their popularity baffling. You probably know this already, but the bright blue orchids sold at your neighborhood grocery store or popular department store are not truly blue. They are white Phalaenopsis treated under a patented process with mysterious chemicals. Unlike any other orchid, they won't rebloom in the same color. The blue will be severely faded or it will come back white. That's why they look so wretchedly unnatural; you can easily tell they weren't born that way. It's a white Phal. in a blue body, crying out for help.
I set out on the Internet to find support for my prejudice, but I learned that people love these hideous things. Cats and Catts readers know that we're big fans of Cattleya expert Arthur Chadwick, so I was happy to find him weighing in on the issue and making an argument that fans of blue should look into Vandas.


So, what's next? Poinsettias sprayed with silver glitter? White carnations dipped in green dye? I don't even want to think about it.
Posted by CatsandCatts at 10:14 PM

thanks for the info :)

Love your blog, Brian. I'm a cat and catt lover, too. Inspires me to get my Orchids Alive in Zone 5 blog going again.

I fell victim to the blue orchid scheme. Being a new orchid gardener, I did not know until after I bought it that my orchid was not a natural blue. I found out about the injected dye when the new blooms were white instead of blue and did some research.

I feel your pain, my friend. There are so many young gardeners tricked into spending too much money on "black" or "blue" flowers. Pisses me off, actually. Ok, off the soap box now. :)

Brian,
Great commentary! Love your take on "blue" Phals (awful!!), and ice cubes for orchids. (Dumb!!) To explain these things, one has to see how artificially so many people live now, and that's why we need a plant-base revolution!

Makes me think of those dye injected fish.

Thanks for all of your comments! On one hand, maybe I shouldn't be so harsh if marketing gimmicks draw people into the orchid hobby. On the other hand, I'm not sure it works out that way.

I'd like to see marketing for endangered slipper orchids. "HyVee shoppers visit our Garden Center today for Paphipedilum druryi! No longer available in its native home!"

I agree -- those "blu" orchids are UGLEY and creepy looking too!


French Bulldog dog Breed is specializing in breeding quality French Bulldog Puppies for Sale of different species like the Black and tan, white, Blue Fawn, Blue, Brindle, Chocolate, Fawn french bulldog puppy, Lilac, Merle, Sable, and White french bulldog puppies. We aim to produce quality French Bulldogs who are both fantastic, socialized companions that show excellent prospects. We go the greater length to ensure that all our puppies leave our home very healthy and are ready to become hugely anticipated addition to your family.