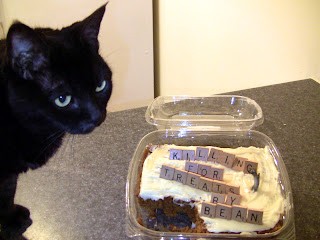 Sabine woke up from her nap in a shower of sunlight.  So, she decided to take another nap.  When she woke up a second time it was with the cold realization of what she had to do.
“Killing for treats,” she though, “all in a day’s work.”
Bean studied the attack plan again. 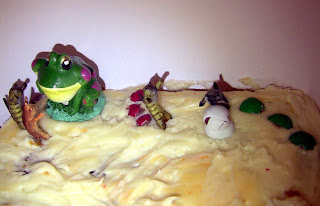 It seemed surefire.  Everyday, about three naps from sundown, they feed the frogs. Bean noted that this usually causes a brief period of chaos.  The frogs emerge from their hiding places in the vivarium to chow on the crickets, and Riley and Griffin take their places along the glass.  For Riley and Griffin, it’s a futile exercise in wishful thinking.  Bob, the most gregarious of the frogs, taunts Riley into batting at the glass.  Bean rolled her eyes nearly time she saw the charade.
Bean suspected Lan Lan felt the same way, because she took advantage of the frog feeding frenzy, too.  It was the same path past: down the stairs, past the cut flowers, into the bathroom, up on sink, and then that plaintive look.  Lan Lan’s eyes searched the room for someone, anyone, to turn on the water faucet so she could drink.  That look, Bean noted, drew her focus outward.  Based on Bean’s reading of the surveillance footage, she would never hear the sneak-up, and she would make an easy mark once she went for the water.  Bean would pounce with her claws out and catch Lan Lan unawares.  Easy treats. 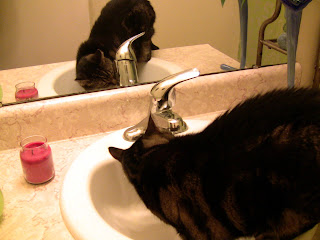 Bean calculated the number of naps she needed before the big event.  While sharpening her claws one last time, Bean pondered the intangibles.  What if this is one of the rare days they don’t feed the frogs?  Speaking of rare days, what if Lan Lan isn’t thirsty for faucet water?  What if Griffin begs for treats at the last minute and throws everything off?
“Griffin!”  Bean thought, “she always messes things up.”  And that was her last thought before drifting off to sleep for the first of five naps.
***
Three weeks ago, Riley approached Bean with a deal.
“I want a quick hit.  Clean.  No way of tracing it back to me.”
“That’s what I do,” Bean said.  “I’m a professional.”
Riley peered at the water dish to see Bean’s claws reflect off the stainless steel bowl.
“And I expect a professional’s reward.” she added.
“Oh, I have plenty of treats,” Riley said.
Bean’s claws retracted.
“Crunchy, soft, salmon, seafood medley, turkey delight…They keep giving me treats, but you know I don’t like ‘em,” Riley assured.
“Well, this all sounds fine,” Bean asked, “but why this kitty?  The house is full of bad kitties.”
“It’s the frogs, man,” he said, “I can’t attack and harass both Bob and Lan Lan at the same time.  I need support.  There are only so many naps in a day, you know?”
Bean gave a nod of understanding.
“So, you’re outsourcing your bad behavior?”
“Basically,” he affirmed.
***
Bean awoke from her final nap and jumped down from the couch.  She made her way past the flower stand with the Sherry Baby and crouched.
“Any minute now,” she thought.
She heard the tell-tale sound of crickets falling into the feeding cup a few moments later, but where was Lan Lan.
Everything was moving too fast and Bean was losing her window of opportunity.  Out of nowhere, the smell of pure joy hit her nose.
“Vanilla?”
Bean looked up at the red flowers of the Sherry Baby.  There was no way, she concluded.  The flower count just isn’t there and, besides, the Sherry Baby gives off more of a chocolate scent.  Bean moved toward the odor and moved away from her outpost.  Vanilla was her favorite treat, and the smell pulled her toward the kitchen in spite of herself.  By this point, Griffin and Riley were likely watching the vivarium.  But where was Lan Lan? 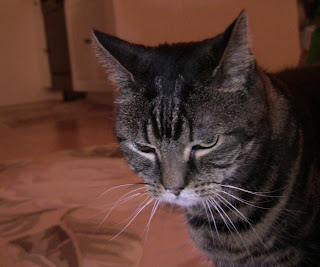 Rounding the corner, Bean found the answers to all of her questions.  Lan Lan was licking her lips and glowing with satisfaction.  Bean skirted past Lan Lan and, with her cover blown and the job ruined, scrambled across the floor to the styrofoam cup.  Maybe there was some vanilla left, she thought. Her dreams crashed when she reached the cup.  A teasing amount of vanilla malt remained at the lip of the styrofoam, not enough to satisfy and just enough to make you want more.  Curses!  By trying to obtain treats in a bad and unethical way, Bean missed out on her favorite treat of all.
After she jumped up on the couch, but before she drifted off to sleep, she thought, “There has to be a lesson in here somewhere.” 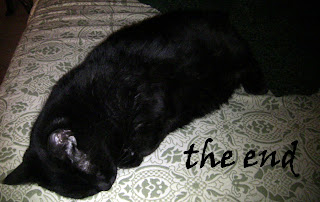 Posted by CatsandCatts at 8:29 PM