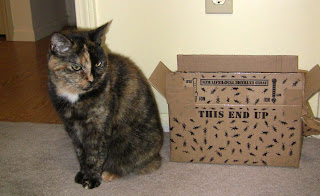 Trixie has generously agreed to share her insights into the difficult task of maintaining the crickets:
Feeding and Care of the Frog Food
by Trixie, February 2010
When crickets arrive at the store, they are basically dry, hungry husks.  They need to be fattened up (aka “gut fed”) before they are fed to the frogs.  The frogs get all their nutrition from the baby cricks, so we need to make sure their bellies are full of fresh fruits and vegetables, and sometimes a little calcium powder on top, before they are fed to the frogs.
Healthy frogs are fat and round.  Our frogs are healthy, and growing plumper by the day.  Bob is our roundest frog, recently looking like he swallowed a half dollar.  Carol is the second fattest; a big, healthy gal.  Alice and Ted both appear the same size they were when they moved into our frog commune, months ago.  Horst is our tiniest frog, but he often grabs four crickets at one feeding.   Our other kids are typically satisfied with one or two baby crickets a day.  So, if you do the math, that’s about a dozen crickets a day.   Eighty-some a week.
We started our adventure, we had Bob and Carol.  Their food needs were minimal. We bought our cricks two dozen at a time, in a little bag with some pieces of egg crate to keep them from stepping on each other and crushing their little dry bodies.   We kept them in a cute little cage.   We fed them carrots.  It was a simple time.
Soon, we added Ted and Alice to our family.  But double the frogs equal double the crickets.   Suddenly, our cricket needs were in the dozens every week.  There were multiple learning moments while transferring the crickets from the bag to the boxes. The kitties loved the sudden opportunities for hunting, stalking, and pouncing on the escapees.   The lazy ones spent their short lives munching on carrots, safely nestled in a few pieces of egg crate.
But then, we added a fifth frog: Horst.  Horst is a very hungry hopper, often feasting on four cricks per feeding.  Suddenly, buying crickets by the dozen became impractical.  The wonderful employees at Pet World suggested that buying crickets by the thousand would be a cheaper and make for fewer trips to the pet store.
Before we brought the box-o-thousand-crickets home, we created a bigger home.  My new research shows that our frogs require a more varied diet than just carrots, so I bought kale, potatoes, apples and carrots for the feeders.  I prepared a huge plastic bin with everything 1000 crickets could ever want.  I layered egg crates, empty toilet paper rolls, paper towel rolls, and cardboard scraps, ensuring that the cricks would have a safe and happy place to await their execution.
Picking up 1000 crickets made me realize….that is a lot of crickets!  In a very tiny box.   I brought the box home, opened it, and promptly let loose a small army of crickets upon our office.  The carpet pulsed with crickety life.  After some serious attempts at capturing the runners, I left it to the cats to clean up my mess.  I need to develop a better system of transferring the load of crickets into the cage.
The 950 some crickets that made the transfer without incident were undoubtedly delighted with the bounty I laid out for them.  They were gutted overnight, and the next day, the frogs were treated to the healthiest food this side of nature.

Most mornings, we open the lid on the big bin of cricks, pull up a piece of egg crating that is full of live ones, and funnel them into a large beer glass.  They ate their last supper, and their lives end shortly after being unceremoniously dumped into the frog homestead.
Many are picked off immediately, courtesy of Horst.   Some head for the top of the bark, and get a brief reprieve.  But the five frogs can climb, and no cricket lives for long in the commune.  25 days later, the cycle starts again, with a new box of crickets.
Posted by CatsandCatts at 6:55 AM