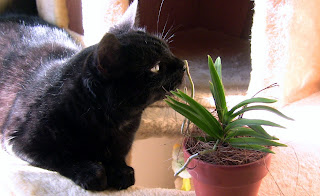 Sabine sniffs the air root of a Neofinetia falcata, the “Samurai orchid” or “Japanese wind orchid” from , , and the Ryukyu Islands. I pronounced Neofinetia in all sorts of interesting ways until I learned its proper pronunciation from Frowine’s Miniature Orchids (Neo-fin-AY-tee-ah). The plant will be much more intriguing in six months, but it’s smart of Bean to check out all of the new ones I bring into the house. The flowers will show off a graceful white spur that curves away from three-lobed lip. This might contribute to the “samurai” name, but Samurai warriors grew the orchid and it stood as a sign of their wealth and respectability. It was difficult to find, so Samurai would demonstrate their bravery and toughness by bringing the plant back to the Japanese royal court.

Linda Fortner (aka “The Orchid Lady”) has a wonderfully informative article about the Neofinetia falcata, including a lot of fascinating material about the naming and classification of the species. This essay also provides a lot of valuable information about its history and care. The plant was first identified in 1728 and first classified into the Western orchid world in 1784. Botanists classified it in a series of different genera over the years, including as an Aerides and an Angracecum, before giving it the generic name Neofinetia (named after 19th century French botanist Achille Finet). Until 1996, falcata was the lone species attached to the genus. E.A. Christenson successfully lobbied for a second Neofinetia species by naming N. richardsiana. Richardsiana is different from falcate because it has a much shorter spur – more of a Samurai dagger than a sword.


Rebecca Tyson Northern’s book Miniature Orchids notes that it’s “a miniature version of a strap-leaf vanda” that’s “deliciously fragrant in the evening.” She tells me to, “Grow on the cool side of intermediate temperatures (pg. 115).”   Frowine’s Miniature Orchids contradicts this by advising us to treat it to an intermediate-to-warm growing environment with medium light (pgs. 144-145). Like so many other orchid-related quandaries, I’m going to entrust the kitties with giving it the proper care.

Posted by CatsandCatts at 6:54 AM


French Bulldog dog Breed is specializing in breeding quality French Bulldog Puppies for Sale of different species like the Black and tan, white, Blue Fawn, Blue, Brindle, Chocolate, Fawn french bulldog puppy, Lilac, Merle, Sable, and White french bulldog puppies. We aim to produce quality French Bulldogs who are both fantastic, socialized companions that show excellent prospects. We go the greater length to ensure that all our puppies leave our home very healthy and are ready to become hugely anticipated addition to your family.

At Buy Beauty & Anti-aging, we provide you a one-stop shop anti-aging products and dermal filler destination.
We're here to keep you stocked up on all your essential brands to help you maintain your looks (or your patients) and stay forever young. You're looking at your very own reliable and convenient one stop destination to purchase Buy Botulinums For Sale, Buy Dermal Filler Online,Buy Dysport Online,
Buy Dysport Online,Buy Cosmetics For Sale,BUY BOTOX 100 IU ONLINE,Buy Xeomin online,BUY BOTOX 200 IU ONLINE,Botox for Sale,Buy Restylane online

With treatments lasting beyond 12 months, you can feel perfectly natural knowing that biodegradable ingredients are recognised by your body as completely safe. buybotox-shopantiaging.com

LOOKING FOR KITTENS FOR SALE?

Cats and kittens are the most popular house pet on the planet. Anybody who loves cats has probably been fascinated by these independent, mischievous, charming, and mysterious pets. If you are looking for a high-quality Cats & Kittens For Sale that really stands out, Downtown Kittens Breeder Cattery is definitely the right choice for you.

Downtown Kittens Breeder” is a family business that specializes in luxury, purebred cats, and kittens for sale. We have proudly provided U.S homes with furry bundles of love since June 2010. As you browse through our website, you will be able to find and even reserve purebreds such as Sphynx Cat Breed,Munchkin Cat Breed,Bengal Cat Breed.