Do you recall the photo of the Hindenburg blimp moments before it burst into flames?  That's what this picture brings to mind.  Here, Matlida paid a visit to the kitties (Lan Lan had the good sense to stay away).  More accurately, the kitties visited Matilda, who had emerged from under the bed to find Bean gorging on her wet food.  Griffin and Matilda faced off, and Riley rushed up just to cause more trouble.  Cue satanic growling noises from The Exorcist.  I set my camera down when the scene turned more chaotic and, after Griffin took a few swipes at our guest, I put a stop to it.

Matilda is a boy kitty with a female name and Griffin is a girl kitty with a male name.  You would think that they have a lot to talk about.  So, why did Griffin react violently to Matilda?  I patiently explained to Griffin that Matilda was only staying for one or two nights, but it didn't seem to make a difference.  It could have been a selfless gesture from Griffin, defending the home against strange intruders.  When a possum, dog, or other cat lurks outside Griffin is almost always the first on the scene, tail puffy, ears back, and ready to attack whatever animal threatens to penetrate the window screen.  On the other hand, her first thought might have been "more cats means fewer treats!" 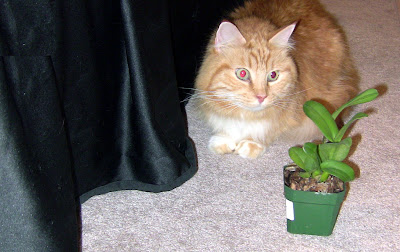 Griffin is also a little bit of a camera hog.  She probably knew that I was going to photograph Matilda, and therefore Griffin's jealousy may have been another factor contributing to the tense atmosphere.  Regardless, with Bean, Riley, and Griffin banished from the room, I took advantage of the brief period of calm to capture Matilda posing with our Pot. Jared's Jewel (Pot. Afternoon Delight 'Magnetism' x Slc. Jewel Box 'Scheherazade' AM/AOS) from Oak Hills Gardens.

Posted by CatsandCatts at 7:14 AM