As I mentioned in an earlier post, Beth and Doug Martin's "Hardy Orchids" was the stand-out display at the 2010 SWROGA and Oklahoma Orchid Society Show.  So, I was delighted to see that the AOS website has run a feature article on the Martins for the last few weeks.  It notes that their exhibit "arguably brought the most comments."  It's easy to see why.

The main show piece was a group of beautifully grown Cypripedium parviflorum var. makasin 'Doug's Delight' AM/AOS, CCM/AOS.  If you squint, you can imagine them blanketing a field in yellow and maroon.  If you look close, you'll be dazzeled by the complex and dainty twistiness of the lateral petals.  If you step back from the flowers, you'll likely think "Wow!  These babies are growing in a $3 plastic storage container!"  I saw show-goers move straight to their exhibit, past dozens of gorgeous Catts and big Dendrobium sprays, and then they would return to it fifteen minutes later.
The exhibit described how to create a "container bog" to keep things saturated below the root zone.  These plants are grown outside in the Midwest with extra protection against accidental warm-ups during the winter to ensure the plants don't decide to start too early (and then die off when it gets cold again).
I'm looking forward to reading about the Martins' cypripediums and other hardy orchids in a future issue of Orchids magazine (I think they are also slated to be featured in Orchid Digest and/or an Orchid Digest video feature).  Doug and Beth are the stalwart leaders of my orchid society (the Orchid Society of Greater Kansas City) and they have gone out of their way this year to make me feel welcomed into the orchid world.  So, I might be biased, but I was thrilled to see good things happen to good people! 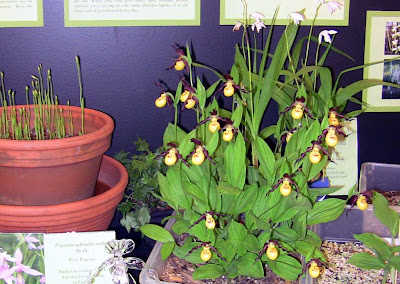 Posted by CatsandCatts at 6:09 PM