Postpumpkinism, or, The Cultural Logic of Late Capitalism 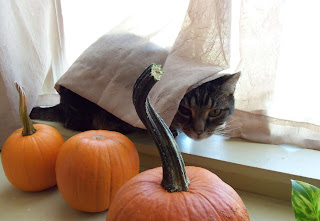 The pumpkin seeds seemed to have so much promise back in June. I tossed a dozen in the raised bed and another dozen by the compost pile. Eventually, I thinned the seedlings down to three. The rapid and healthy growth encouraged me to indulge the plants' frequent need for water and attention. I saw small pumpkins form by the end of summer and my hopes swelled. I contemplated walking away from my career to pursue pumpkin farming because, after all, I'm so good at it. I'll have so many pumpkins, I thought, I'll have to give them away to an orphanage or something. When I told people about my pumpkins, some responded that they tried and gave up because of squash bug problems. I felt superior because I refused to give into these nasty insects and was prepared to let loose a chemical fury on the brood.


But squash bugs are unusually persistent. They had a roach-like ability to reproduce themselves despite my toxins. The pumpkin crop itself proved capricious: blossoms that looked so promising failed to mature, pumpkins in an improper position on the straw started to rot, and the heat and bugs did more damage than I wanted to admit. Now, looking over my pumpkin harvest, my total haul will be about 6-7 pumpkins. I definitely need to keep my day job. 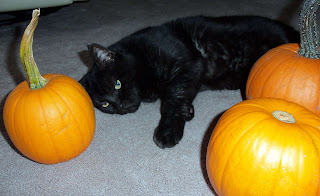 I love all things pumpkin, but this experience has strengthened my identity as a flower gardener. Pumpkins inevitably reference their exchange-value and use-value. While we can appreciate its cylindrical shape and deep orange color, a pumpkin invites us to consider its uses in cooking. We have a sense of a pumpkin's worth through envisioning its transformation into pie or soup. It's difficult or impossible not to assigning a dollar amount to my pumpkins and it's dispiriting to see them sold in the local grocery store for far less than what I spent in pest control, water, and labor time.

Flowers, on the other hand, only reference themselves. They have no use-value and their exchange-value is driven by aesthetic considerations. I never think "Oh, I could make so many pies with those daylilies!" Like modern art, flowers' uselessness is part of their value and appeal. Flowers don't expect anything from us except an occasional arrangement in a vase.
Posted by CatsandCatts at 7:52 PM

I love it! (And my pumpkin crop, so bountiful last year, fell prey to a groundhog)!

Thanks for your support!
Maybe if squash bugs weren't so absolutely hideous.... I loathe them.

Squash bugs are also very hard on my garden. The only way I have found to control them is by picking them off and scraping the eggs from under the leaves. The birds and the praying mantids help as well. Your pumpkins are beautiful!!!