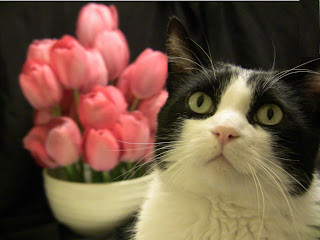 As we barrel toward the end of April I thought it would be a good idea to review the Cats and Catts 2011 tulip experience. Riley and Bean were especially interested. I purchased a variety in September without a true bulb agenda. I planted the daffodils in front of the tulips, and the short flowers in front of the bigger flowers, and let nature take it from there.

The results surprised me. The varieties I thought I'd like were unimpressive, and the ones that looked gaudy on the label turned out to be elegant in bloom. Cats and Catts fans know how much I love white Cattleyas and Brassavolas, so it was natural that I would buy some white tulips. But they didn't really do it for me and smelled unimpressive. 'Shirley' grew on me, but I don't like its black throat. The red Darwins, however, were awesome. The Fosterianas with the smaller stems and blooms didn't impress me either. To be fair, it all impressed me, but the taller, more vase-friendly, plants were simply fantastic. Some of them opened so flat that they took on the form of an entirely different flower. 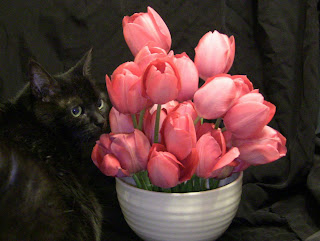 There's plenty of room for more bulbs six months from now, and it will be interesting to see which ones come back for the 2012 Spring. With all of the mental energy demanded by the orchids and the daylilies and the cats (and sometimes the frogs), I doubt I'll be making any cut-throat decisions about tulip bulbs six months from now. On the other hand, it's not too early to look at bulb catalogs.
Posted by CatsandCatts at 8:26 PM

Tulips are so gorgeous.

Hey, did you hear the news about the extra smart orchids?

The color of those tulips is gorgeous. And the photo with the tulips and the cat is excellent.

When you are ready for bulb suggestions, just let me know! ;)